Prices exclude VAT, shipping is free of charge, and orders are sent within three working days.

Car coat, made in London, with weatherproof ripstop — a paradoxically very light (7oz) but very strong aramid cloth from Yorkshire — and with horn buttons from the West Midlands.

The car coat fits true to size — the mannequin here, for instance, is as standard a 38 chest as you will ever meet, and wears size S — but is cut to accommodate, say, a shirt and light jacket underneath. If you're not prone to layering, or prefer a slimmer fit, then best go a size down.

Called "weatherproof" for a reason, this cloth. Rain, no matter how much, beads up and rolls off. Aramid fibres are inherently hydrophobic, see. It is also as light as a feather, is highly breathable, and has industry-leading heat-transfer properties: when the day is warm, the wearer is cool, and vice-versa. 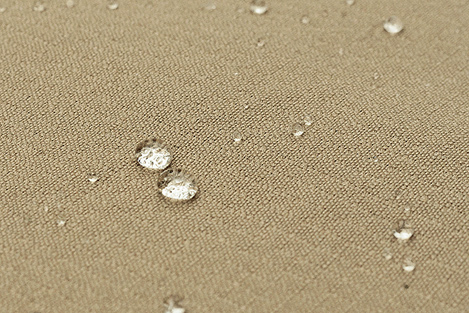 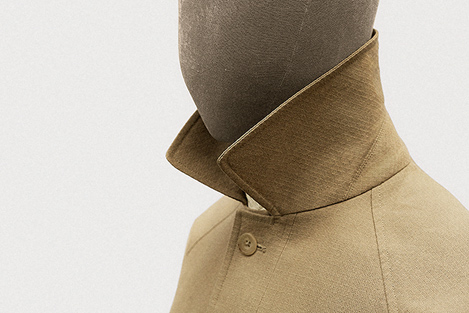 The car coat is a five-button number, which falls to the upper thigh. It has a fairly large and traditional collar, which is cut to sit proudly when down — nothing limp or concave here — and to really hug the neck when up; to shield the wind and not to flop and fall around. The cutting of collars is taken seriously here.
The buttons are horn — light tortoiseshell in colour and matte in finish. Being as they are an entirely natural thing, each looks a little different, one to the next — varying in tone, hue, and striatic marking. Same goes for the hand-sewn backing buttons (below-left) which anchor their big brothers at the front. 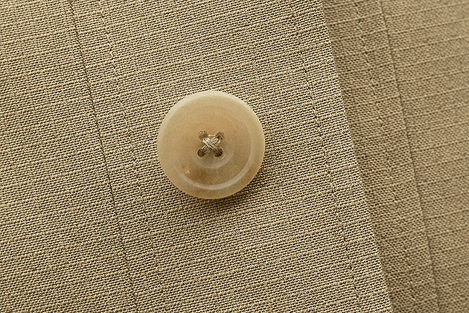 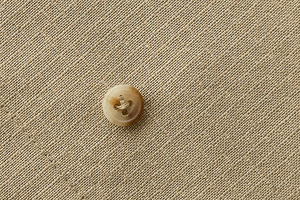 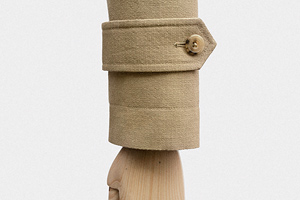 The car coat has a curtain — or flap, if you want to take all the fun out of it — which circles its middle, all the way around. Beneath it, at the front, sit two very large patch-pockets. The curtain serves as a cover for the pockets, to prevent rain — or, in certain locales, light fingers — from getting inside. 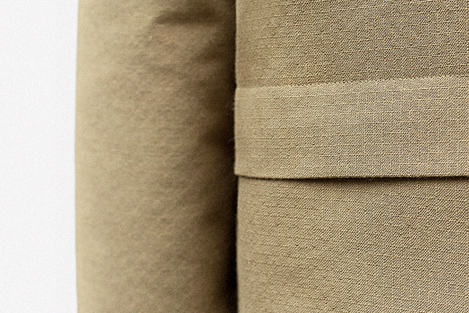 Not that you'd know it on first glance, but the pockets at the front may also be accessed sideways. "Warmer pockets", they're sometimes called.
With things so eventful on the outside of the coat, inside, things are clean and simple, with a chest pocket on the left-side as worn. 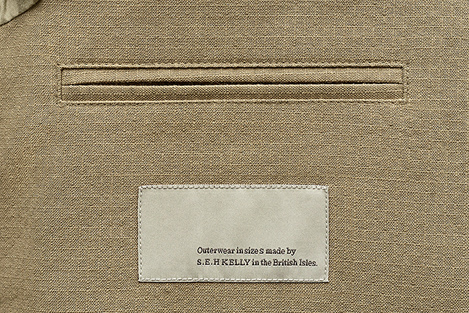 The car coat has a half-lining of even more weatherproof ripstop. In this way, when also taking into account the facing on the inside-front of the coat, you have a double-layer of cloth on the most weather-exposed parts of the exterior. Elsewhere, meanwhile, the seams are smartly bound with beige cotton.
The cloth is incredibly strong: it is by far the toughest fabric at the workshop. It doesn't fade, even after years outdoors; it doesn't crease and is thus wonderful travel cloth; and it doesn't abrade, so can take great wear and tear. It's a double-faced, cloth, marrying two tough ripstop layers (this is the reverse). 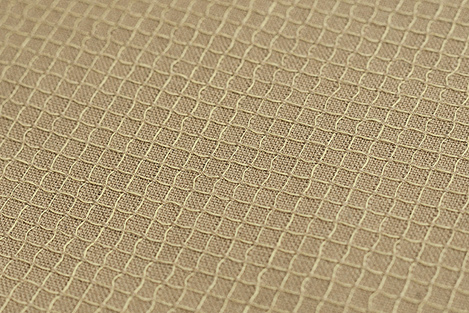 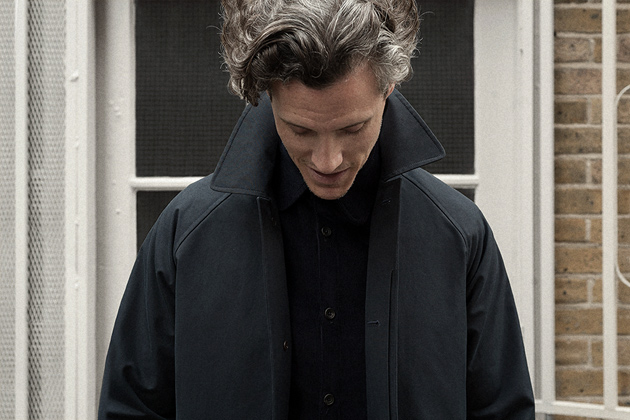 The coat is made in north-east London. It is a very specialised skill, assembling coats from heavy cloth, and every reasonable step — and the odd unreasonable step — is to taken to endure things are built to last, from the cutting of the pattern to the work on the machine, but without the results being stiff or bulky. 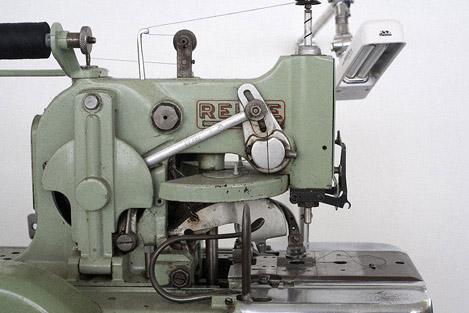 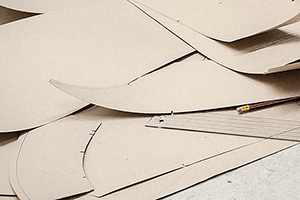 The ripstop cloth comes from a mill in the Heavy Woollen District of West Yorkshire, founded in the 1800s. Things have, of course, moved very much with the times, and so the traditions of weaving are allied now to cutting-edge, industry-leading standards in weaving, dyeing, and testing. 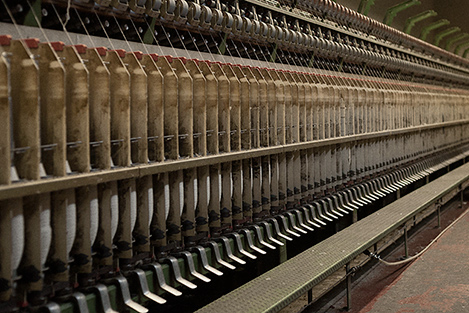 The horn buttons were cut, shaped, and polished by the last such factory in Britain (now defunct). It was part of a tradition in the Midlands first linked to the meat industry of the 18th century. "It is no easy task," said William Hutton in 1780, "to enumerate the infinite diversity of buttons made in Birmingham."

Just want to let you know that I have received the car coat, it is absolutely beautiful. Perfect length, lovely buttons, and nicely fitted as expected. I really like those iconic two-way pockets: they are very useful, in either storing items or sliding in my hands sideways, and they create a more casual look. A very happy purchase as expected. Thank you again for crafting it and delivering it so quickly with care.

This gentleman bought the coat in cotton stay-wax in February 2020.

The car coat is great. Probably the best-crafted piece of clothing I've ever held. Thanks for the help with everything.

This gent purchased a grey Ventile car coat in November of 2016.

I can only say things about [...] the car coat that you probably already know: they're really, really wonderful garments. I had imagined saving them for the spring, but realised they are both perfect for the weather that we are having right now in south Hessen. The coat is particularly kuschelig and really is like no other coat I've owned.

So said, kindly, by a man who bought the car coat in Ventile in the back end of 2014.

The fit [of the car coat] is good, like I hoped. My wife could not believe that this was newly made coat and not a vintage one, based on the quality of the stitching and the finishing.

High praise received with gratitude by a car coat owner in Canada back in December 2016.

I love the car coat. Beautifully made. And thank you the accompanying care advice. No doubt I shall buy again.

Comments from a chap who bought the car coat in Ventile in July 2016.

Just to let you know I have been putting the car coat through its paces over the past few weeks. Rain or wind, it has performed, as expected — spectacularly. The sizing is just about perfect, with or without a jacket underneath.

Few are the chaps who own the car coat in black Ventile — but here are the words of one such chap, from 2014.

The liner arrived in perfect shape yesterday, and is already at my tailors with the two coats to have buttons installed. I have had many button-in liners over the years, and this one is the best. The quality of the materials is amazing — most companies seem to use inferior materials for this sort of thing — and the workmanship is your usual perfection.

Sometimes padded woollen liners are made for the car coat. This chap bought one in February 2018, and seems, by all reports, fairly happy with it.